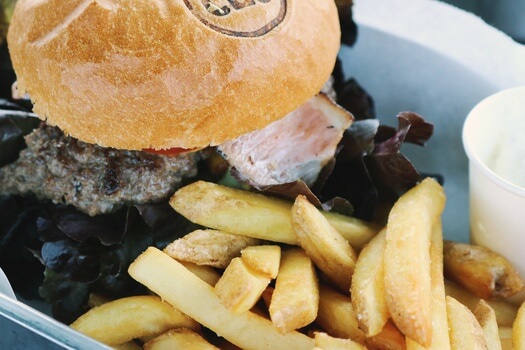 In the beginning, God created the Heavens and the Earth and populated the Earth with broccoli, cauliflower and spinach, green and yellow and red vegetables of all kinds, so Man and Woman would live long and healthy lives. Then using God’s great gifts, Satan created Ben and Jerry’s Ice Cream and Krispy Creme Donuts. And Satan said, “You want chocolate with that?”

And Man said, “Yes!” and Woman said, “and as long as you’re at it, add some sprinkles.”

And they gained 10 pounds. And Satan smiled. And God created the healthful yogurt that Woman might keep the figure that Man found so fair. And Satan brought forth white flour from the wheat, and sugar from the cane and combined them. And Woman went from size 6 to size 14. So God said, “Try my fresh green salad.”

And Satan presented Thousand-Island Dressing, buttery croutons and garlic toast on the side. And Man and Woman unfastened their belts following the repast. God then said, “I have sent you heart healthy vegetables and olive oil in which to cook them.”

And Satan brought forth deep fried fish and chicken-fried steak so big it needed its own platter. And Man gained more weight and his cholesterol went through the roof. God then created a light, fluffy white cake, named it “Angel Food Cake,” and said, “It is good.”

Satan then created chocolate cake and named it “Devil’s Food.” God then brought forth running shoes so that His children might lose those extra pounds. And Satan gave cable TV with a remote control so Man would not have to toil changing the channels. And Man and Woman laughed and cried before the flickering blue light and gained pounds.

Then God brought forth the potato, naturally low in fat and brimming with nutrition. And Satan peeled off the healthful skin and sliced thestarchy center into chips and deep-fried them. And Man gained pounds. God then gave lean beef so that Man might consume fewer calories and still satisfy his appetite. And Satan created McDonald’s and its $0.99 double cheeseburger. Then said, “You want fries with that?”

And Man replied, “Yes! And super size them!” And Satan said, “It is good.” And Man went into cardiac arrest.