You are here: Home » Just Grandparents 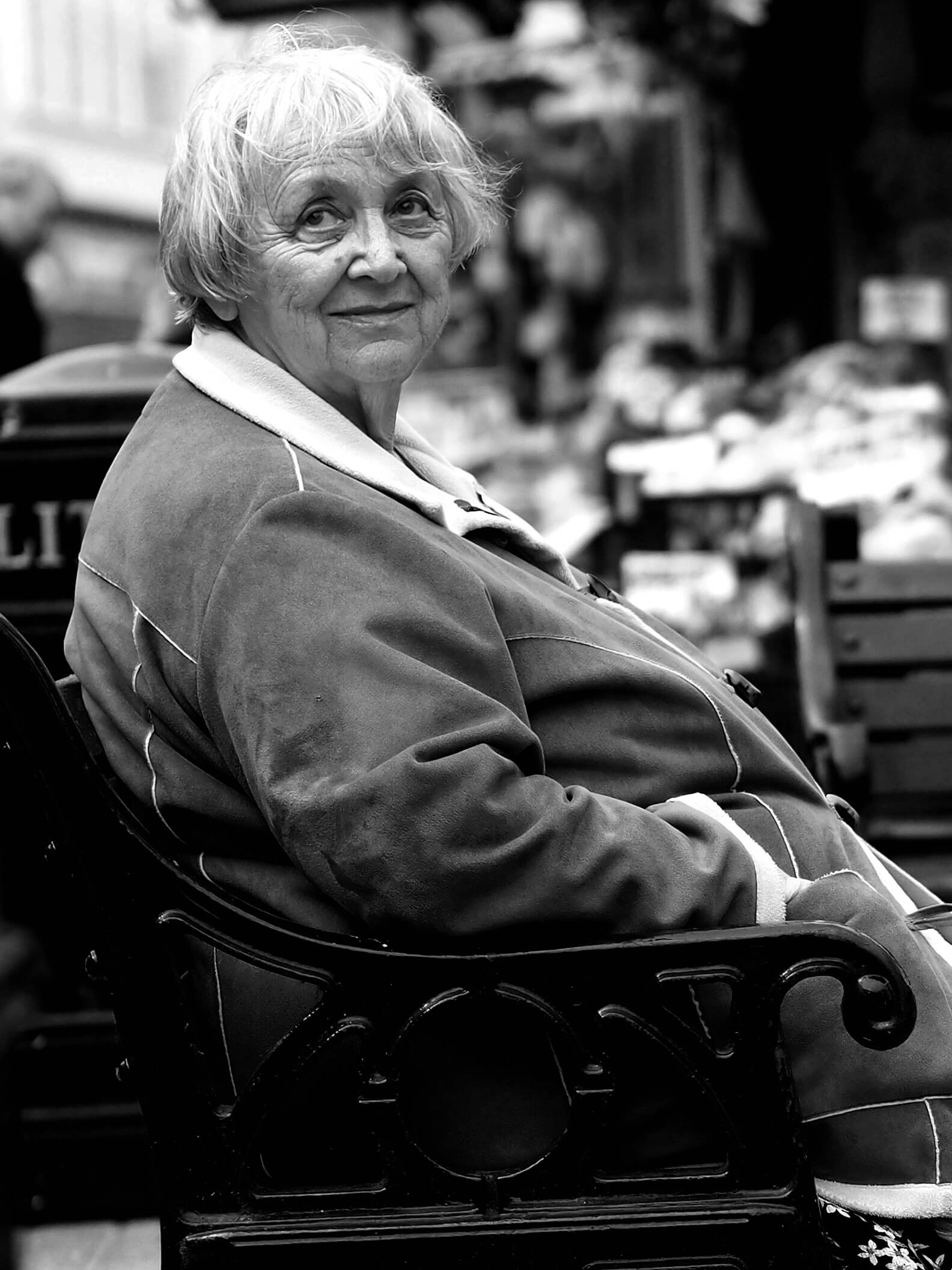 She was in the bathroom, putting on her makeup, under the watchful eyes of her young granddaughter, as she’d done many times before. After she applied her lipstick and started to leave, the little one said, “But grandma, you forgot to kiss the toilet paper good-bye! I will probably never put lipstick on again without thinking about kissing the toilet paper good-bye.”

My young grandson called the other day to wish me a happy birthday. He asked me how old I was, and I told him, “80”. My grandson was quiet for a moment, and then he asked, “Did you start at one?”

After putting her grandchildren to bed, a grandmother changed into old slacks and a droopy blouse and proceeded to wash her hair. As she heard the children getting more and more rambunctious, her patience grew thin. Finally, she threw a towel around her head and stormed into their room, putting them back to bed with stern warnings. As she left the room, she heard the three-year-old say with a trembling voice, “Who was THAT?”

A grandmother was telling her little granddaughter what her own childhood was like. “We used to skate outside on a pond. I had a swing made from a tyre; it hung from a tree in our front yard. We rode our pony. We picked wild raspberries in the woods.”

The little girl was wide-eyed, taking this all in. At last she said, “I sure wish I’d gotten to know you sooner!”

My grandson was visiting one day when he asked, “Grandma, do you know how you and God are alike?”

I mentally polished my halo and I said, “No, how are we alike?”

“You’re both old,” he replied.

A little girl was diligently pounding away on her grandfather’s word processor. She told him she was writing a story. “What’s it about?” he asked.

I didn’t know if my granddaughter had learned her colours yet, so I decided to test her. I would point out something and ask what color it was. She would tell me and was always correct. It was fun for me, so I continued. At last, she headed for the door, saying, “Grandma, I think you should try to figure out some of these colours yourself!”

When my grandson Billy and I entered our vacation cabin, we kept the lights off until we were inside to keep from attracting pesky insects. Still, a few fireflies followed us in. Noticing them before I did, Billy whispered, “It’s no use grandpa. Now the mosquitoes are coming after us with flashlights.”

When my grandson asked me how old I was, I teasingly replied, “I’m not sure.”

A second year came home from school and said to her grandmother, “Grandma, guess what? We learned how to make babies today.”

The grandmother, more than a little surprised, tried to keep her cool. “That’s interesting.” she said, “How do you make babies?”

Children’s Logic: “Give me a sentence about a public servant,” said a teacher.

The small boy wrote: “The fireman came down the ladder pregnant.”

The teacher took the lad aside to correct him. “Don’t you know what pregnant means?” she asked.

“Sure,” said the young boy confidently. “It means carrying a child.”

A grandfather was delivering his grandchildren to their home one day when a fire engine zoomed past. Sitting in the front seat of the fire truck was a Dalmatian dog. The children started discussing the dog’s duties.

“They use him to keep crowds back,” said one child.

A third child brought the argument to a close. “They use the dogs,” she said firmly, “to find the fire hydrants.”

A 6-year-old was asked where his grandma lived. “Oh,” he said, “she lives at the airport, and when we want her, we just go get her. Then, when we’re done having her visit, we take her back to the airport.”

“Grandpa is the smartest man on earth! He teaches me good things, but I don’t get to see him enough to get as smart as him!”

Young David was four years old and was staying with his grandfather for a few days. He’d been playing outside with the other kids, when he came into the house and asked, “Grandpa, what’s that called when two people sleep in the same bedroom and one is on top of the other?”

His Grandpa was a little taken aback, but he decided to tell him the truth. “Well, David, it’s called intercourse.”

Little David said, “Okay,” and went back outside to play with the other kids.

A few minutes later he came back in and said angrily, “Grandpa, it isn’t called intercourse. It’s called bunk beds. And Jimmy’s mum wants to talk to you.”

WHAT IS A GRANDPARENT?

(Taken from papers written by a class of 8-year-olds)

Grandparents are a lady and a man who have no little children of their own. They like other people’s.

A grandfather is a man and a grandmother is a lady!

Grandparents don’t have to do anything except be there when we come to see them.

They are so old they shouldn’t play hard or run.

It is good if they drive us to the shops and give us money.

When they take us for walks, they slow down past things like pretty leaves and caterpillars.

They show us and talk to us about the colours of the flowers and also why we shouldn’t step on ‘cracks.’

Usually grandmothers are fat, but not too fat to tie your shoes.

They wear glasses and funny underwear.

They can take their teeth and gums out.

Grandparents don’t have to be smart.

They have to answer questions like, ‘Why isn’t God married?’ and ‘How come dogs chase cats?’

When they read to us, they don’t skip. They don’t mind if we ask for the same story over again.

Everybody should try to have a grandmother, especially if you don’t have television because they are the only grown- ups who like to spend time with us.

They know we should have snack time before bedtime and they say prayers with us and kiss us even when we’ve acted bad.

It’s funny when they bend over; you hear gas leaks, and they blame their dog.

A 6-year-old was asked where his grandma lived. “Oh,” he said, “She lives at the airport, and when we want her, we juts go get her. Then, when we’re done having her visit, we take her back to the airport.”

“Good morning. At present we are not at home but please leave your message after you hear the beep.

If you are one of our children, dial 1 and then select the option from 1 to 5 in order of “arrival” so we know who it is.

If you need us to stay with the children, press 2.

If you want to borrow the car, press 3.

If you want us to wash your clothes and do your ironing, press 4.

If you want the grandchildren to sleep here tonight, press 5.

If you want us to pick up the kids at school, press 6.

If you want us to prepare a meal for Sunday or to have it delivered to your home, press 7.

If you want to come to eat here, press 8

If you are going to invite us to dinner or take us to the theatre, start talking, we are listening.”

Three mischievous old grannies were sitting on a bench outside a nursing home when an old grandpa walked by.  And one of the old grandmas yelled out saying,”We bet we can tell exactly how old you are.”

The old man said, “There is no way you can guess it, you old fools.”

One of the old grandmas said, “Sure we can! Just drop your pants and underpants and we can tell your exact age.”

Embarrassed just a little, but anxious to prove they couldn’t do it, he dropped his drawers. The grandmas asked him to first turn around a couple of times and to jump up and down several times. Then they all piped up and said, “You’re 87 years old!”

Standing with his pants down around his ankles, the old gent asked, “How in the world did you guess?”

Slapping their knees and grinning from ear to ear, the three old ladies happily yelled in unison, “We were at your birthday party yesterday!”

A grandson got lost at the shopping mall. He approached a uniformed security guard and said, “I’ve lost my grandpa!”

The guard asked,”What is his name?”

The guard smiled and then asked, “What’s he like?”

The little mite hesitated for a long moment and then replied,

At one point during a game, the coach called one of his 9-year-old baseball players aside and asked, “Do you understand what co-operation is? What a team is?”

“Do you understand that what matters is whether we win or lose together as a team?”

The little boy nodded in the affirmative.

“So,” the coach continued, “I’m sure you know, when an out is called, you shouldn’t argue, curse, attack the umpire, or call him an asshole. Do you understand all that?”

Again, the little boy nodded in the affirmative.

The coach continued, “And when I take you out of the game so that another boy gets a chance to play, it’s not a dumb ass decision or that the coach is a shithead, is it?”

“Good”, said the coach. “Now go over there and explain all that to your grandmother.